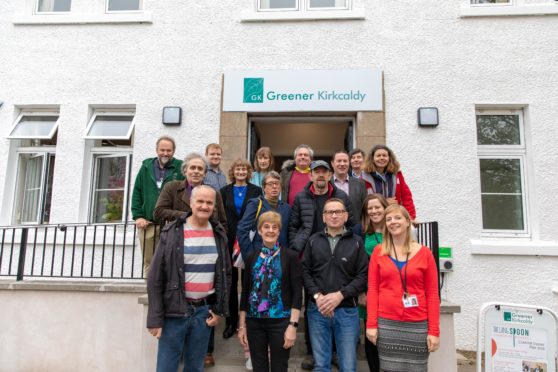 Ten years after Greener Kirkcaldy began tackling disadvantage and inequality within their town, last week local people were celebrating the official opening of their new community hub. With purpose built premises, Greener Kirkcaldy can continue tackling food and fuel poverty in the town, but always with an eye to promoting Kirkcaldy as a greener and fairer place to live. These new premises also provides a home to the local independent food bank. Since the introduction of Universal Credit last year, demand on this food bank has increased 140%. Does anyone actually believe this new benefit system is working?

Emergency food parcels distributed by Scotland’s foodbanks have increased by nearly a quarter in the last year.

Some 42% of referrals were due to the new benefits regime which can leave claimants going months without payments.

Laura Ferguson, operations manager for Scotland, said: “What we are seeing year-upon-year is more and more people struggling to eat because they simply cannot afford food. A 200% increase in just five years is not right.

“Ultimately, it’s unacceptable that anyone should have to use a food bank in the first place. No charity can replace the dignity of having enough money to buy food.

“Our benefits system is supposed to protect us all from being swept into poverty.

“Universal Credit should be part of the solution but currently the five-week wait is leaving many without enough money to cover the basics.

“As a priority, we’re urging the government to end the wait for universal credit to ease the pressure on thousands of households.”

Worryingly 70,000 of the 210,605 three-day emergency food supplies given to people in crisis went to children.

Campbell Robb, chief executive of the Joseph Rowntree Foundation, said: “It is just wrong that in our society a growing number of people, including children, are going hungry because of our consistent failure to get to grips with poverty.

“When the use of food banks reaches a record high we are beyond the language of warning signs and wake up calls. Unless we take bold action to solve poverty we risk undermining what we stand for as a country.”

A Department of Work and Pensions spokeswoman said: “It is not true to say that people need to wait five weeks for their first payment. Universal Credit is available to claimants on day one.

“It cannot be claimed that universal credit is driving the overall use of food banks or that benefit changes and delays are driving growth.

“The trust’s own analysis shows a substantial fall in the share of parcels being issued due to benefit payment delays.

“The best route out of poverty is to help people into sustainable employment which, with record employment, we are doing.”