Unemployment rates were used as part of the study

The results of a new study have revealed where the most affluent and most disadvantaged areas of Ireland are.

The 2016 Pobal HP Deprivation Index, compiled with data from the 2016 Census, found that an electoral area known as “Mansion House B” which comprises of Grafton Street, part of Stephen’s Green and Leinster House is the most affluent area in Ireland.

Meanwhile, the least affluent area is “John’s A” on the north side of Limerick city. Unemployment for men in the area stands at 69 percent while female unemployment stands at 40 percent. Just over 2 percent of the population of 759 people have a third level education. The study also found that affluence is highest in the urban peripheries and gradually declines towards rural locations. 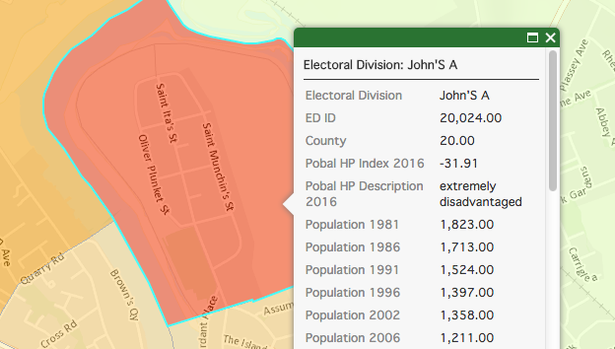 Dublin has more affluent areas than the rest of the country and suffered least during the recession years. However, “Priorswood B” in Darndale, North Dublin is ranked as “very disadvantaged”. Men living in this area have an unemployment rate of 37.8 percent while women have an unemployment rate of 32.8 percent. Small towns with populations of 1,000 – 5,000 people have been the worst affected over the past ten years, being disproportionately hit by the recession and undergoing a slower recovery

Speaking at the launch of the report today, Minister for Rural and Community Development, Michael Ring T.D., said “The publication of the new updated Pobal HP Deprivation Index takes account of the significant changes experienced throughout the country since 2011.

“The Taoiseach established the Department of Rural and Community Development in response to the impact of the recession on rural Ireland and to ensure the recovery reaches every part of Ireland.

“The index provides further proof of the need for the investments my Department is providing to our rural communities and to our towns and villages”.